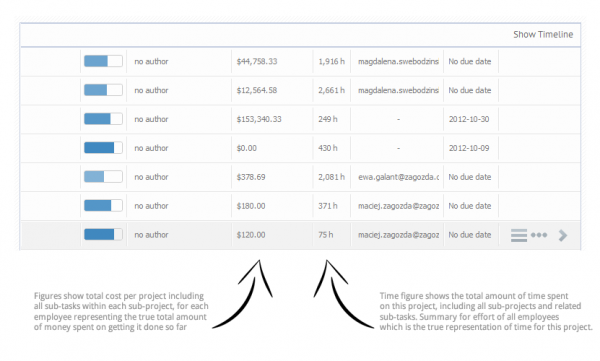 What makes use of TaskBeat so special in software development or in developing any other creative, non-standard work is: summaries for project metrics, in particular the multi-dimensional time/cost evidence of work already completed by the team.

Management metrics allow measuring true efforts based on actual expenditure, projects or activities. This in turn allows management to optimise their decisions on what gets done when much more accurately and produce better estimates for upcoming work. For example, having a feature that was originally estimated for 10hrs which has grown due to more work and extra tasks added and turned to take 15hrs allows the team to learn. Having to estimate another feature in the future you can apply the ratios to obtain more accurate estimate before approaching the work. If your team estimates this new upcoming feature as similar to the one that has been originally estimated for 10 hours and the team agreed that the new feature is half that complex you already know that the right estimate would be 7.5hrs, not 5. You can review that assumption in retrospect to learn again, and again and again until your estimates will eventually become very, very accurate.

Having accurate knowledge of how long particular projects, feature groups and individual features take and cost allows creating clear paths of project delivery and with that clarity deliver much more, on schedule and within budget. Because TaskBeat allows decomposition of tasks you can always look into a particular project and dissect the efforts into individual tasks to evaluate the bits that take particularly long and optimise your business for planning to include them upfront in the future projects right at the planning stage, if necessary. It’s all about eliminating surprises and learning from the past. It’s not all about culture of evidence as much as it is about the culture of learning.